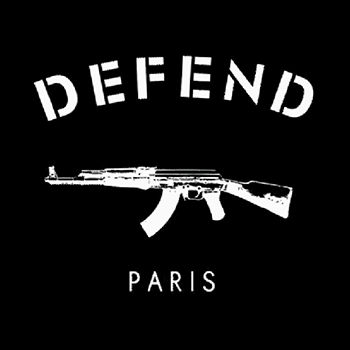 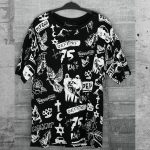 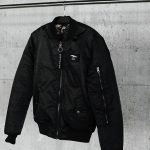 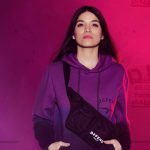 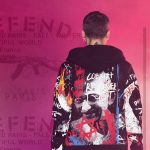 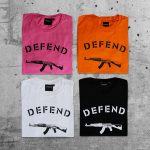 Defend Paris a French street-wear brand with a raw, aggressive and provocative attitude, sprung out of Paris’ underground scene with a mission. A mission to make a difference in the world by combining charity and street-wear into a brand, which would generate awareness and compassion for human rights, freedom, humanity and not be afraid to bring the worlds hopelessness out in the open.

With their raw, aggressive and provocative attitude yet meaningful intentions Defend Paris seeks to inspire to younger generation to stand-up for their beliefs and fight for what they believe in.

Defend Paris uses the AK47 – Kalashnikov as a metaphor for peace and an expression of our passion, wrath and humanity.

In the early 2000’s a company formed, which later would evolve into Defend Paris, by Jeremy Duoay, Arnaud Deprez & Sofiane Kihoul. Their first concept of making difference, which came to light, was a line of wax candles formed as grenades, where all proceeds would be donated to an organisation against child soldiers.

The concept for Defend Paris brand and the motivation for making a difference developed, when they saw Spike Lee (Producer) on television in a t-shirt, which had written “Defend Brooklyn” on it. The purpose and message behind the t-shirt was to defend a part of Brooklyn from demolition and inspired the trio to make a difference in their own manner.

To build awareness about their wax candle grenades and charity, they held a reception where they had a few t-shirts made, which they gave to certain bartenders, staff and other attendees. Against all odds these t-shirts stole all the hype. The founders, whom have a background in fashion at street-wear brand “Hype Means Nothing”, re-evaluated their concept and came back stronger and evolved their original idea into “Defend Paris” as a clothing brand.

From April until June the trio produced a line of sweatshirts with an AK47 Kalashnikov logo. As ingenious as they are, they decided not to sell but only to distribute the sweatshirts too whom they saw fit. This creative and effective marketing strategy, quickly stirred a buzz on social media. People were intrigued and fascinated by the unavailability; focus on charity, aggressive nature yet generous with humanitarian core values. “Who was this upcoming brand? Whom put compassion and humanity in focus through their clothes?”People thought. Helped along the city of Paris’ football club PSG -Paris Saint-Germain national league win in season 12/13.

Even though the hype reached an all time high, the founders decided to continue their strategy of not selling their product but focusing on bringing in brand ambassadors. The trio understood the value of forming unavailability and creating mystery around their brand. Defend Paris’ first brand ambassador was Arnaud Deprez friend Brahim Zaibat, a professional dancer whom worked with none other than Madonna.

Madonna decides to participate in the project and helps the trio to create and put focus on “Defend Children’s rights”. The path for Defend Paris’ way to Hollywood was carved and collaborations with mega stars were a reality. Chris Brown, Rihanna, Steve Aoki, Zachary Quinto, Kanye West, Omar Sy, Chris Rock, Lil Wayne, The Game, Jack Nicholson, Mike Tyson, AKON etc. just to name a few out of many. Meanwhile all the largest fashion news stations, blogs and magazines are writing about Defend Paris, which contributes to the hype.

When Defend Paris finally opened up for orders, it was a banging success from day one. Defend Paris, as we know it, was born.

Defend Paris’ focus of bringing attention to charity and the world’s hopelessness, is embodied in their continuing support to “Human Rights Watch” whom they give 1 euro per item sold.

Human Rights Watch is a non-profit, non-governmental human rights organization made up of roughly 400 staff around the world. Who focuses on human rights across the globe, they are known for their accurate fact-finding, impartial reporting, effective use of media, and targeted advocacy, often in partnership with local human rights groups.

With the leverage this brings, Human Rights Watch meets with governments, the United Nations, regional groups like the African Union and the European Union, financial institutions, and corporations to press for changes in policy and practice that promote human rights and justice around the world.

Human Rights Watch defends the rights of people worldwide may it be health, violence, terrorism, children’s rights, migrants, etc. They scrupulously investigate and expose the facts widely, and pressure those with power to respect rights and secure justice.